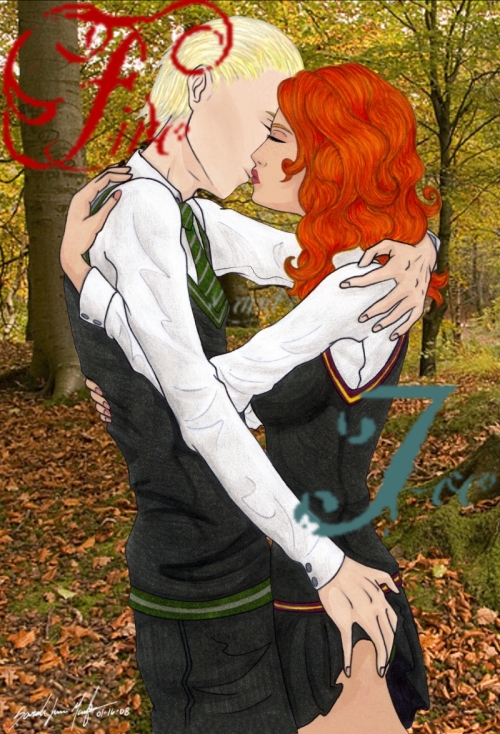 Hello, Im kind'a a quasi-banned member here on F&I. I havent updated my fic in forever, but I do write a lot, and my fanfiction is really popular over on FanFiction.net and Portkey.org. If I can land myself ANOTHER awesome beta (I have had a few, but I loose contact with them so frequently) I will hopefully get to updating my fic again soon.
I know why they are SO strict about grammar (nothing is worse than a fic with misspellings and bad grammar) but as a dyslexic, I struggle. But, Im up for some quality.

I write a lot of, well, odd fics, a lot of what-ifs because I quite frankly- HATED Harry Potter and the Tedious Camping Expedition (aka: Deathly Hallows) and have had to come up with my own scenarios. I have also decided to abandon cannon for some of them because, well, canon is lame anyways.

I draw quite a bit too, and on my Deviant Art account you can view some of my D/G work.
http://therainedrop.deviantart.com/
Despite my tarnished reputation, I still like coming here, and I would still love to make friends.

Things I LOVE:
Draco- DUH!
Ginny- Keep her in a realistic character set and she is awesome.
Ginny dumping Harry for Draco: Nothing makes me happier than reading a fic where Ginny leaves Harry (preferably in the cruelest manner possible) to be with Draco. :]
Poor!Draco: Something about Draco not having anything (whether he lost it because of the war, or it is a what-if fic where Ginny is rich and Draco was the one poor) is just SO alluring to me. I think it is a fun chance to explore his character should he have been born in different circumstances.
SecretlySweet!Draco: After book six came out we all got to see that Draco isnt ALL bad. He has feelings. I like fics where he has feelings. If he is a baby, a crybaby, a hopeless romantic, whatever, its all good in my book, I like a bit of three dimensionality to my characters.
Malfoy/Black Family: Fics that include my two favorite families are awesome.
Abused!Draco: I know, I know, it is not cannon, I know, I know, it is cliché and overdone, but I cant help it, something about a poor, misunderstood, beaten and underappreciated Draco makes me want to cuddle him. So long as there is no Daddy!Rape going on Im game.
Quidditch playing Ginny: Honestly, what kind of career would Ginny end up with? I can tell you, it is not an international singer/model/actress/etc. honestly people, wtf?
CHARACTER DEVELOPMENT: I dont care what your writing style is, but please, could you throw in a little character development? Please? Make your characters interesting? JKR certainly didnt.
A PLOT!: I know it is fun to write a fic every once in a while where it is just an excuse for Draco and Ginny to have mind-blowing sex, and hey, I have been known to read those from time to time, but come on people, when writing a fic, could you include a plot? Just a little one? Pweeze?


Things I HATE:
-D/G/Other: The other particularly being Blaise. I can't stand threesome fics, I hate'em I hate'em, I hate'em. Doesn't anyone have any decency anymore? any morals? I support D/G, not D/G/and their third. YUCK! I kind'a don't even like the people who ship D/G/B...
-Slash: Don't like it. Dont abuse characters that dont even belong to you.
-Potter: He's a prick.
-Granger: I was rooting for her to die in book 7.
-Dumbledore: Enough said.
-SexGod!Draco: seen it, lets be creative now.
-Evil!Ginny: Sorry, that doesn't fly with me. So she was possessed by the DL when she was 11. That makes her an "evil" person? Please. She is a Gryffindor, keep her in character.
-RomanticRape: There is nothing romantic or character building about rape. Draco raping Ginny is not hot, it is wrong. Ginny falling in love with Draco despite the fact that he rapes her constantly is unrealistic, and disturbing. Seriously, wtf is wrong with some people?
-Granger: Oh, did I mention her already? *throws shoe at her*
-Draco/Ginny/ect. Goth/Emo/cutter/etc.: I know cutting is cool as is wearing tight girly pants and whining about how unfair life is, but seriously, I dont want to read your fic about that. I consider that abuse of the characters to throw your own personal teen angst into the story.

Thirteen years after the Dark Lord was vanquished, Draco Malfoy is out of Azkaban, wandless, practically destitute, and physically afflicted from his trespasses against Voldemort. Who should chance by and save this shell of a man from what he has become, but a fiery redhead from his dark past.

Draco has a rare gift and an all too common disease, Ginny has an irritating boyfriend and a desire to rebel. What can they expect from each other and who will end up surprising the other more?